I am always looking for ways to jazz up our vegetable side dishes. I can only eat frozen vegetables for so many days before I crack. Don’t get me wrong, frozen vegetables are magnificent in the fact that they are convenient, inexpensive and quick to prepare. But there are days I just crave something, well, fresher!

A vegetable that has been making its appearance on my table lately is Brussels sprouts. My love of these miniture cabbages is relatively new and happend unexpectantly. I have my friend, Jessi, to thank for this nutritious addition to our table. 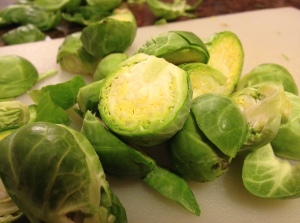 It all started the spring we moved into our house (2009). I wanted a garden so badly that the weekend after we moved in I had my husband till up a patch in our backyard and we planted. I say that like it was no big thing, when in reality, I was pretty naive. Growing up we had a garden that I helped harvest, but I never paid attention to spacing, soil quality and other necessary attributes of successful gardening. This is where my friend, Jessi, came in. She used to work for a local garden center and moved into a new house just a couple months before we did, so they were also planing their own garden for the first time.

Jessi did all the research and pretty much brought everything over that we needed (including plants). I requested tomatoes, peppers, peas and green beans. Jessi brought those, plus some orphan cabbage plants that didn’t fit into her garden (at least I thought they were cabbage). She came, planted everything, and left. I wasn’t thrilled about the cabbage, but hey, I like coleslaw. So I rolled with it.

The rest of the summer I was watering, weeding and nuturing my produce. Soon the “cabbage” was growing like crazy and crowding my beloved tomato plants. I cursed those “cabbage” plants and vowed to never take Jessi’s “orphan” plants again. 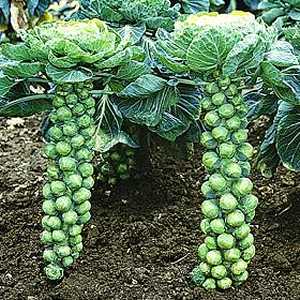 Well, lo and behold, those “cabbage” plants kept growing taller and taller, fuller and fuller. Then one day I noticed little baby “cabbage” balls along the stalk of the plant. That’s when it hit me, “these aren’t cabbage, these are Brussels sprouts”!
I nearly ripped them up. What was I going to do with Brussels sprouts? The only sprouts I had ever had were over-steamed and mushy. Nothing I ever wanted to try again.

Thankfully the vegetable-loving dietitian in me kicked in and left them alone. That year was a great year for the sprouts (we had 4 plants) and I was determined to find a tasty way to prepare these. After a couple botched recipes, I came up with something so delicious that even my 2 and 3 year old kids request.

So I would like to take this opportunity to thank Jessi for introducing me to one of my favorite vegetables!

Drizzle olive oil in a large skillet and preheat over medium-high heat.

Trim the bottoms of the sprouts and cut in half.

Lay the sprouts, cut side down, in the preheated skillet. Sprinkle with salt (I prefer sea salt) and pepper.

Roast for 5-7 minutes until the bottoms are golden brown. Flip to brown the back sides. Immediately squeeze the lemon juice over the sprouts and sprinkle with cheese. Let cook until the juice evaporates (up to 1 minute).

Remove from the skillet and eat.

All you do:
1. Drizzle olive oil in a large skillet. Preheat the skillet over medium-high heat.
2. Cut off the bottom ends of the Brussels sprouts and discard. Cut the remaining part in half.
3. Lay the sprouts, cut side down, in the preheated skillet. Sprinkle with salt and pepper.
4. Roast for 5-7 minutes until the bottoms are golden brown. Flip to brown the back sides.
5. Immediately squeeze the lemon juice over the sprouts and sprinkle with cheese. Let cook until the juice evaporates (up to 1 minute).
6. Remove from the skillet and eat.

A mix of realism, humor, tips and delicious recipes. I am a mother, wife, passionate sewer and registered dietitian. I want to show people that food is medicine and getting back in the kitchen is the key to health. I love everything about food: gardening, shopping, cooking and most of all, EATING! Notice that "dishes" isn't on that list.... Food isn't perfect. It nourishes our minds, bodies and souls! As a blogger, journalist, speaker and broadcast professional, I enjoy talking about food and nutrition for websites, television, radio, magazines, and newspapers. I also work with companies to provide customized nutrition education and recipe development.
View all posts by thisRDeats →
This entry was posted in Recipes, Uncategorized and tagged brussels sprouts, garden, recipe, recipes, vegetables. Bookmark the permalink.